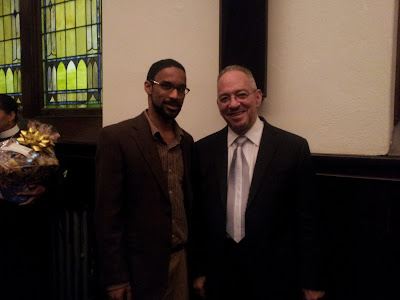 So Jeremiah Wright was in Philly, on my block. He spoke on the 14th and the 15th at the traditional baptist church on the corner.  Unfortunately, I was sick and was only able to make it out on the 15th. He looked at how Paul and Silas were treated, along with how they responded to that treatment, and its final outcome. He compared their being put “in an awkward predicament” having done nothing wrong, and having been lied on, with the African American experience of slavery, suffering, and stereotypes (my alliteration, not his).

He called on folks to respond with prayer, realizing that our prayers are being heard by God in ways we cannot fathom. He also called on us to praise, in which he particularly highlighted the need to pass on the negro spirituals and old songs that have sustained our community for generations. 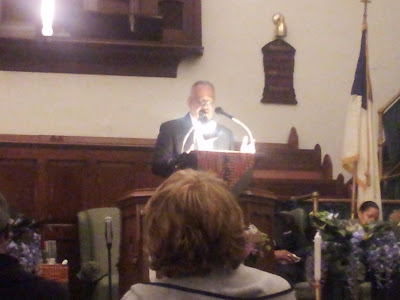 Jeremiah Wright in the Pulpit

Finally, I just want to state that Jeremiah Wright is a lyricist. Yes, he is a wordsmith, who carefully crafts and delivers words with power, courage, creativity, and prophetic imagination. I thoroughly enjoyed just hearing him speak, nonetheless actually receiving the content packaged in his brilliance.

I know that Jeremiah Wright is a controversial figure to many in our country, but I urge you to move past the sound bites, and you will see that he is nothing more than a continuation of the black prophetic tradition that we see in the likes of Sojourner Truth, Frederick Douglas, Ida B. Wells, Fred Shuttlesworth, Martin Luther King, Jr., and other courageous black christian leaders who spoke truth to power, whether or not it was convenient or popular. In the case of speaking against racism on a systemic level in America, it has never been popular with the dominant culture.