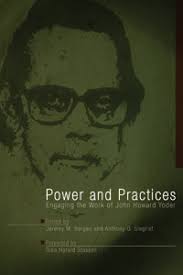 Power and Practices: Engaging the Work of John Howard Yoder

It is 2013 and John Howard Yoder’s writings are still the most influential Anabaptist works around. However, people are not (all) asking the same old questions that were being asked when Yoder first arrived on the scene, nor are many satisfied with merely rehashing old conversations with the Niebuhr brothers’ works. Instead, Yoder’s relevance has been seen worthy of venturing into new territories, using his insight and wisdom to wrestle with tough questions and issues facing our current society. The question is how can someone like John H. Yoder be utilized today to engage our most pressing concerns? That’s precisely where Power and Practices: Engaging the Work of John Howard Yoder is helpful.

In Power and Practices, young and emerging theologians place Yoder in dialogue with various issues and voices that Yoder himself never did. More so, they offer a much more critical, opposed to blindly affirming or unrelentingly negative to his thought, approach to dialoging with Yoder. With this stance, these insightful authors are not afraid to agree with Yoder on one point, while pressing him or ultimately rejecting his thoughts on another point. This book, then, offers both a rich theological perspective people can engage with while also offering a way of taking someone like Yoder (or theologians we value) and learning how to inherit and receive from them wisely.

This is concept of inheritance is beautifully covered in the first chapter of the book by Chris Huebner. Huebner utilizes Yoder’s own thoughts and approach to inheritance as a starting point to glean how we too can receive from a theological giant like John Howard Yoder. Ultimately, he points us to a way of engaging Yoder that is not about preservation but rather produces new conversation and dialogue. In fact, to not do push Yoder beyond his own limits, is unfaithful to Yoder’s own approach, says Huebner. “Given Yoder’s dialogical and ad hoc approach to doing theology, it might even be suggested that the more a reading of Yoder strives to be faithful in a literal way to repeating and capturing his main claims, the more we ought to approach it with caution” (24). With that, Huebner pushes us to consider Yoder’s dialogical significance today, and not merely as something that must be held to, just because.

Following Chapter 1 there are a variety of authors tackling a plethora of issues. Philip Stoltzfus takes Yoder to task on two fronts, his portrayal of a Violent God communicated through the language of Yahweh’s Wars (despite a portrayal of a nonviolent Jesus), as well as what he saw as missteps in theological approach that led to such inconsistencies. Andrew Brubacher Kaethler argues that while Yoder called for patience in ecumenical dialogue and challenged the oversimplified caricatures of the Radical Reformation, he himself was guilty of those same attitudes when he portrayed Scholasticism. Some other topics of interest are Branson Parler on Yoder and the Politics of Creation, Richard Bourne establishes election along with Yoder’s eschatology and exile while in conversation with Foucault and moving towards a more political posture. Paul Heidebrecht problematizes Yoder’s understanding of engineering, and how, when understood right, can be a helpful metaphor for theologians. Paul Martens contends that Yoder’s body of work is not consistent, ultimately moving away from the Christological particularity he is known for, and Andy Alexis-Baker challenges those that too quickly have tried to utilize Yoder in support for global policing.

For me the chapter that intrigued me the most was Nekeisha Alexis-Baker’s Freedom of the Cross. Alexis-Baker places John Howard Yoder in conversation with Womanist theologians. She is primarily interested in Yoder’s understanding of the concrete Cross of Jesus. She mediates between Delores Williams’ concerns around Black women’s surrogacy and subjugation and how the glorification of the Cross perpetuates it and Yoder’s contention that the Cross ought not to be domesticated into a symbol for all or any suffering other than being crushed by the powers from an expected result of nonconformity which derives ought of following Jesus’ radically political life. From Yoder we are challenged with the idea of ‘maximizing freedom’, while also left struggling with the term ‘revolutionary subordination’ that we inherit from him. She offers the Church the concept of ‘Creative Transformation’ in context with “seeking to maximize people’s freedom by confronting that social order’s injustice” as a careful yet powerful articulation that takes serious Yoder’s wisdom and the discernment of Womanist theologians. This is done while not avoiding the need to dialogically wrestle with both sides; bolstering points where appropriate and nuancing arguments as needed. Ultimately, Nekeisha Alexis-Baker ends with a political and liberating understanding of the Cross that empowers Black women and demonstrates Jesus continuing solidarity in their lives.

If you have read any of John Howard Yoder’s work at all then you will definitely want to read Power and Practices. If you want to consider how to engage the work of any significant theologian then Power and Practices is for you. This book communicates and demonstrates the responsibility of each generation to take serious the task of inheritance and reception, not by a shallow preservation but an active and critical engagement. I highly recommend this book for Yoderians and Young theologians alike. I know already that it will find a useful place in my own studies, thought, and writing.

Power and Practices is available for purchase here.

(As full disclosure, I was given this review copy of Power and Practices with the purpose of having it reviewed publicly on my blog. I am not receiving any funds and there is no expectation of necessarily receiving a positive review. These are my genuine thoughts.)