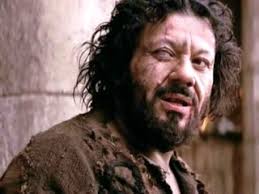 It seems that holy week would be an appropriate time to reconsider Barabbas, despite colonized depictions that disparage and belie the legacy of this man. I suggest that Barabbas is not the man often depicted in many Western Churches, rather through faithful study of the gospel records a clear alternative image is painted of this New Testament biblical character.

Tell me if this sounds familiar. Barabbas is a psycho criminal that went through the towns ravaging and murdering. In fact, he probably had one cocked eye and foamed at the mouth right? Wrong. Western Christian tradition has stripped Barabbas of his Jewishness and from the larger socio-political context that offers meaning to his presence in the story. To understand Barabbas one must remember his Jewish body (and all others) under the control, rule, and domination of the Roman Empire. Without the proper historical realities, Barabbas’ role in the story is missed (which also means we miss something about Jesus as well).

I have always contended that the Gospels portray Barabbas as a desperate freedom fighter, who much like Nat Turner (or American Revolutionaries) wanted to free himself from imperial and oppressive forces. It becomes clear that he was arrested for participating in a revolutionary movement. Consider the Biblical record…

Clearly Barabbas was arrested for his leadership in an insurrection against the Roman Empire and not because he was a foaming at the mouth serial killer. It is convenient for Western Imperial Christianity to denigrate Barabbas in that way, completely dismissing the conditions that led to such behavior. Not only that, but it strips Jesus from his context as well, for he too is Jewish under the rule of the Roman Empire.  I will explore this more in a follow up post because there is a significant relationship between Barabbas and Jesus that ought not be overlooked. However, for the moment consider taking a fresh look at Barabbas and how his socio-political as well as Jewish significance plays out in the gospel narrative.  Barabbas was in the tradition of the radical Zealots (of which Jesus had such companions in his own entourage).

How have you been taught about Barabbas? Is your understanding of him in sync with the Gospel records? Freestyle with me…

5 thoughts on “Denigrating the Oppressed: A Fresh Look At Barabbas”